Benjamin Luig works as a consultant on international agricultural policies. He ran the Rosa-Luxemburg-Stiftung’s Food Sovereignty Dialogue Programme in Johannesburg, South Africa from 2016 to 2019. The author thanks Paula Cardoso (TCOE) for her background research on the study.

German importers are of paramount importance to South Africa’s wine sector, with Germany the second-largest importing country of wine after Great Britain. Wine is traded in two forms: either in large tanks or in bottles. Germany imports even more bulk wine in tanks from South Africa than Great Britain. Wineries like Peter Mertes or Zimmermann-Graeff & Müller bottle millions of litres of wine from South Africa every year, which then end up on the shelves of German supermarkets and discount stores. Along with its food retail industry, Germany’s specialist wine retailers and hospitality sectors are also significant importers of South African wine. Companies such as Hawesko Holding—, which includes subsidiaries such as the Jacques’ Wine-Depot, the Champagne and Wine Distribution Company (CWD), and Wein Wolf—also import large quantities of wine from the country, and the online trade in South African wine is also gaining momentum.

It is primarily the market power of the food retail sector in Germany that is putting pressure on South African wineries and vineyards to become more flexible and competitive in terms of pricing. When it comes to purchases within the retail sector, unfair trading practices tend to be the rule rather than the exception. Suppliers pay a fee amounting to approximately one quarter of their sale price in order to even be included in the list of suppliers, and are also required to pay extra if they wish to have their product displayed in a clearly visible spot on the supermarket shelf. German retailers inform South African wineries of the quantities of wine that they plan to purchase at very short notice, and these outsourced risks are then passed down the supply chain to the farms. The technical basis for this flexible system is the flexitank, which is not only a cost-effective means of transporting large quantities of wine, but also allows for wines to be blended after a longer period of time without compromising their flavour. This system has enabled wineries like Peter Mertes to produce wines in bottles which appear to be homogeneous but are in fact blends; that is, a mixture of wines from different producers. The trade in bulk wine has led to vineyards and wineries in South Africa becoming more interchangeable. A major share of the added value is being shifted from South Africa to Germany.

The price margins along the supply chains of the retail sector are extremely inequitable. When wine is exported, a share of less than 16 percent of the retail price charged in Germany actually remains in South Africa. The discount retailer and the bottling winery in Germany share over 60 percent of the margin. The vineyard and the exporting winery in South Africa keep roughly 7 percent, with workers only receiving 1.4 percent of the retail price. The development of the import price of bulk wine over the last ten years illustrates the price pressure exerted by German importers on the South African wine sector: the price has consistently been less than 80 cents (90 US cents) per litre, with the value of the South African rand in steady decline. This curve would take a significantly sharper downwards turn if adjusted for inflation. In 2018, the price per litre of bulk wine was just under 60 cents (66 US cents). However, Germany is not only a key importer of low-price wines, but also of wines from the higher price categories. South African producers are able to attain three to five euros per litre in these higher price categories, which are, however, considerably limited in terms of volume. 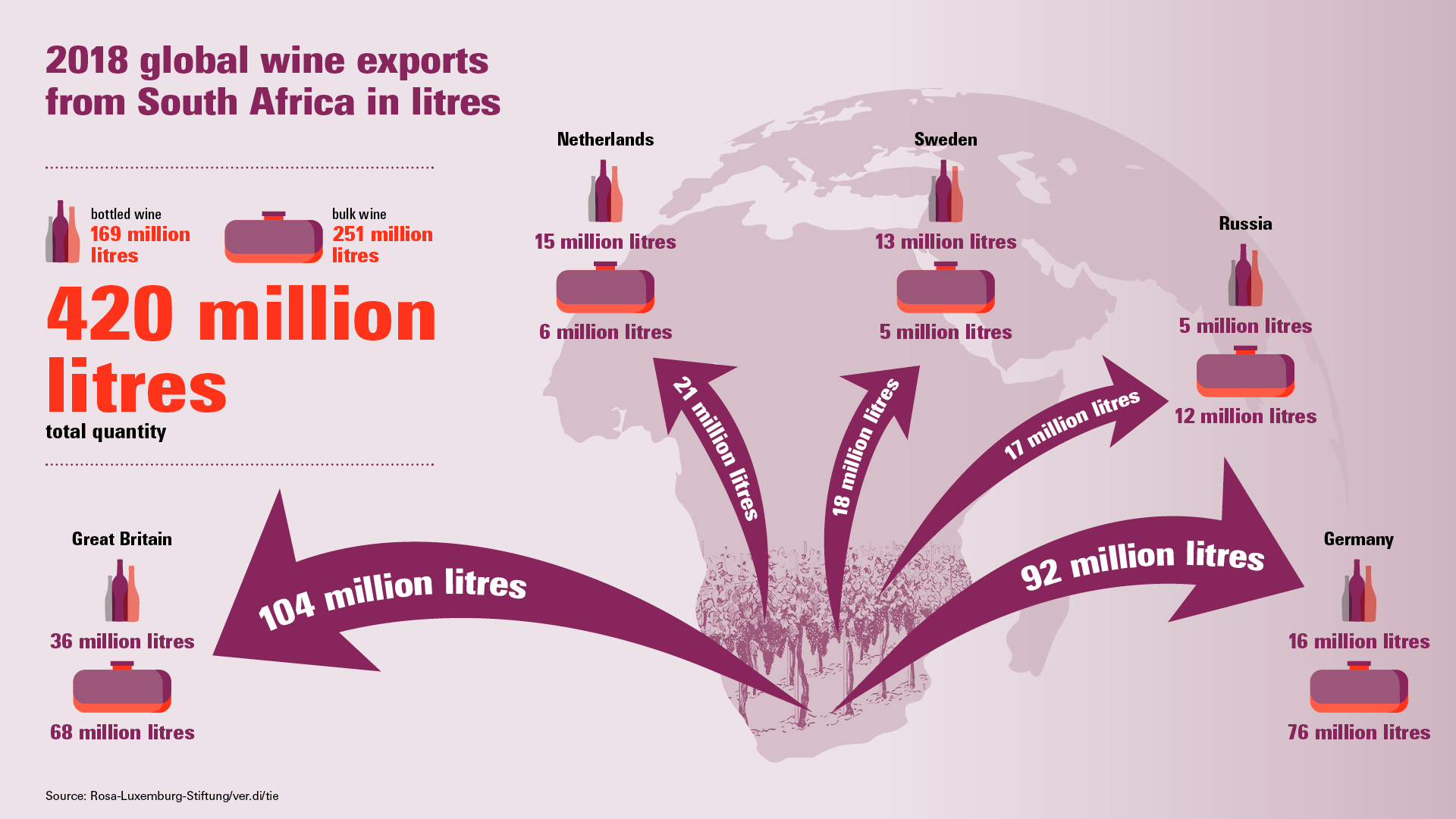 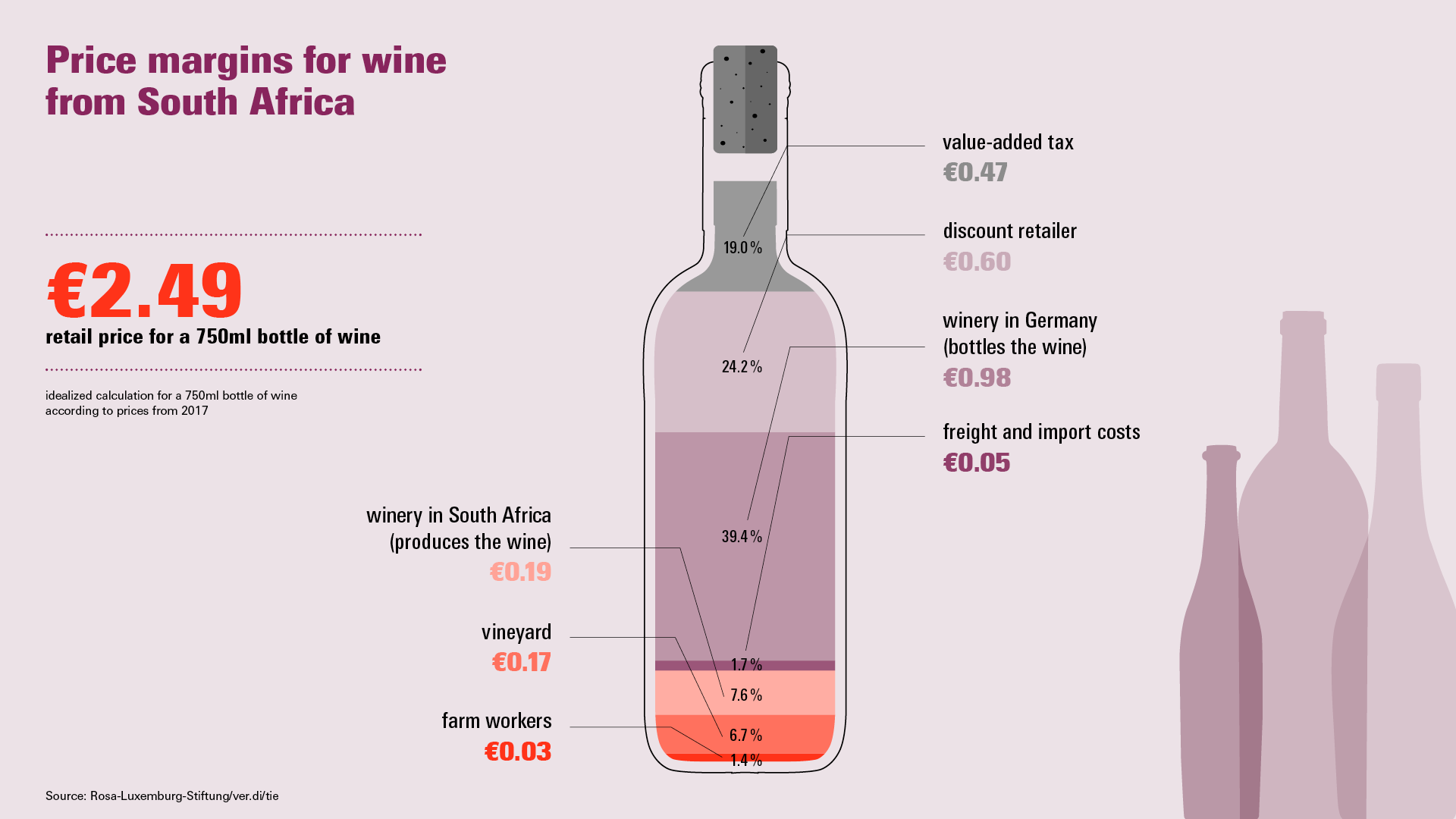 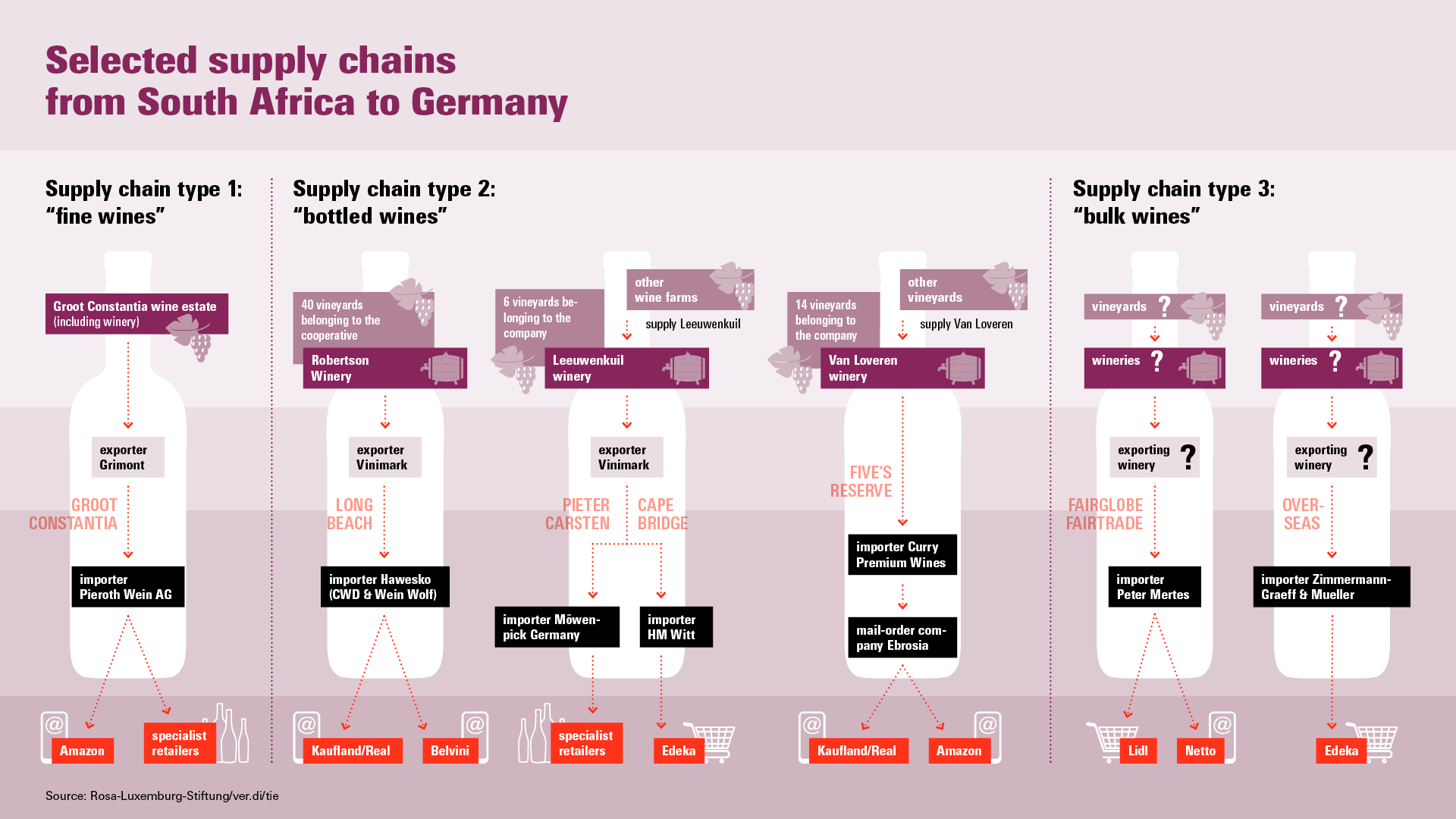 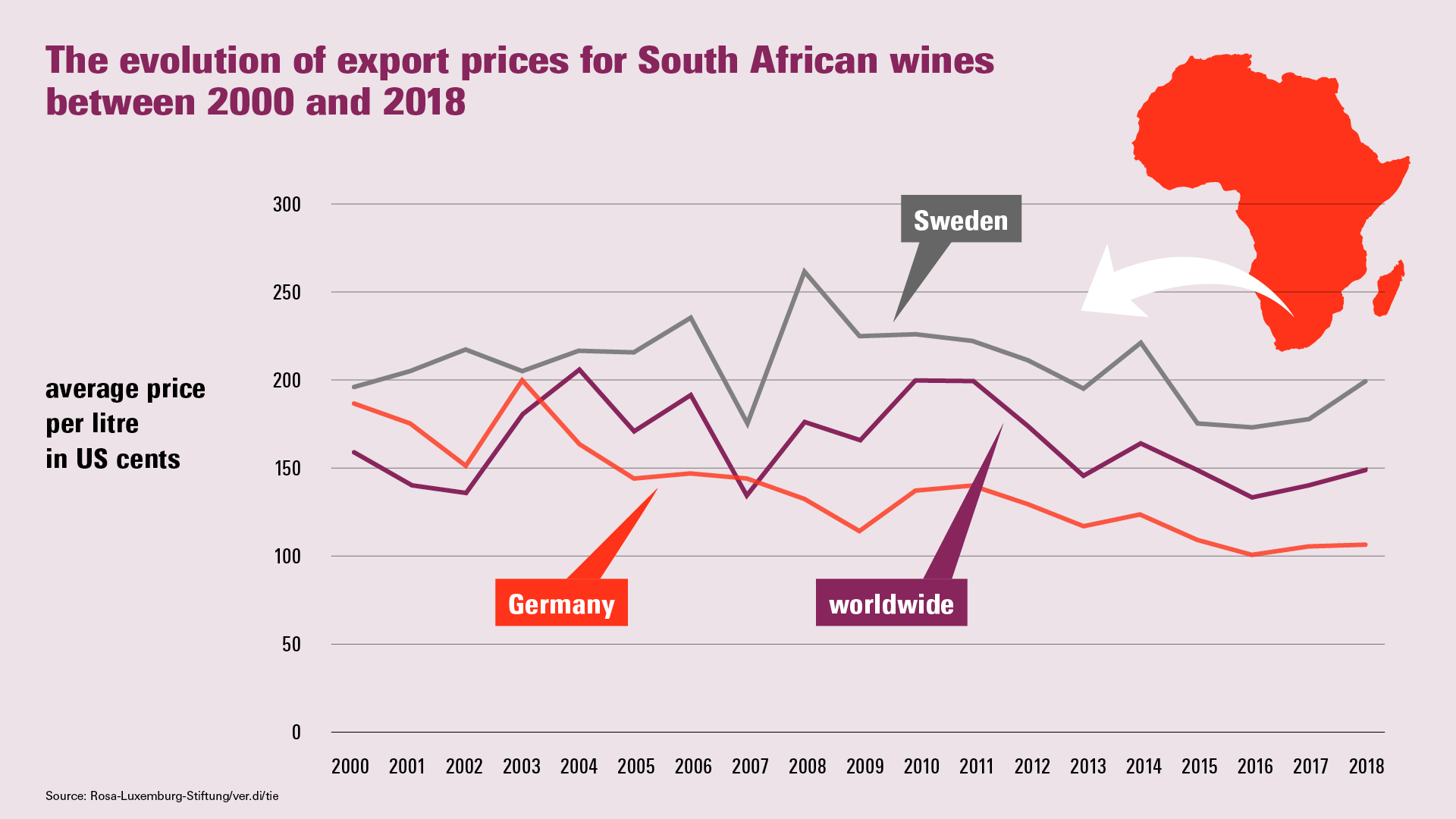 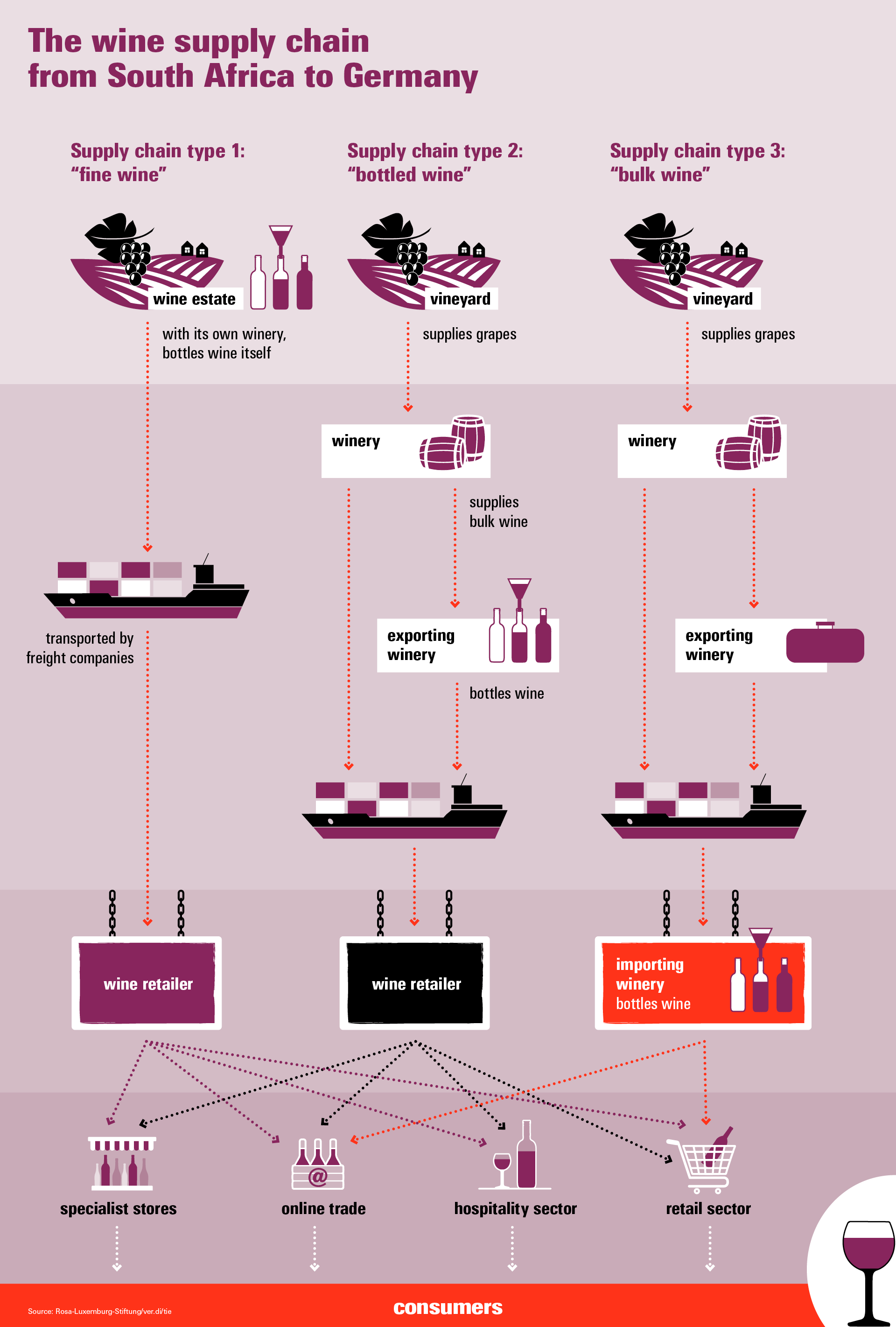 The price pressure exerted by the German food retail sector is exacerbating the crisis in which the South African wine sector already finds itself. According to a statement from the South African Department of Employment and Labour in March 2020, a particularly high rate of violations of coronavirus regulations for occupational health and safety took place in the agricultural sector. Masks and disinfectants were often not distributed, and social distancing measures were not observed in the fields and pack houses. The South African wine sector was also hit particularly hard by the government’s ban on the sale of alcohol within the country during the coronavirus pandemic, which has led to the industry becoming especially reliant on its exports. According to a statement from the producers’ association, more than 21,000 jobs in the wine sector are being cut. 80 percent of farm workers in the wine sector are seasonal workers; when the harvest season ends in March, they rely on the state’s Unemployment Insurance Fund (UIF), and their access to the relevant administrative bodies has been significantly impeded by the lockdown. The shutdown of public transport services during the lockdown primarily impacted workers living on remote farms in isolated locations, as they have to travel to nearby towns for medical appointments, appointments at government offices, or to do grocery shopping. The coronavirus lockdown has thus exposed the extreme precarity that already pervades the wine production industry. The minimum wage in the agricultural sector is currently 18.68 rand per hour, which equates to roughly €1.16. The weekly wage for a 45-hour work week is 840.60 rand (just under €52), which is about one third below the living wage needed to support a household, as calculated by the NGO Pietermaritzburg Economic Justice & Dignity (PMBEJD).

The investigations conducted on four farms in South Africa as part of this study revealed that violations of fundamental human rights and labour rights took place at each location. All of the farms in question also supply the German market either through retail groups such as Edeka and Kaufland/Real, or through specialist wine traders.

Do Subalterns Dream of Digital Worlds?

ILO to elect its new Director-General